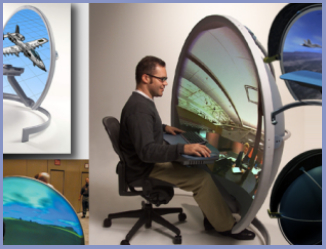 Justin Rattner, CTO of Intel, about the future of virtual worlds and the rise of the 3D internet.

- As much as Second Life and the other virtual worlds like it are pretty cool, they’re not what we would consider or define to be the 3d internet. We want to see exceptional levels of presentation and cinematic quality in the graphics. We want to make user content creation much easier.

- We want the persistence to apply across virtual worlds not to be contained just in a single virtual world. We want higher levels of social interaction and better human-computer interfaces to enable that, and we like the behaviour, the way things act in the virtual world to be much more natural.

- Second Life is only an example because people are familiar with it, but there are literally dozens and dozens of these virtual worlds available on the internet today: Club Penguin, Webkins, Eve Online, World of Warcraft and others.

- MMORPG games (Massively multiplayer online role-playing game) are a rich 3d environment and the games have really pushed the 3d experience. If you want to look to the future and how the general experience will be, look at the games.

- There are different kinds of metaverses, the client-server variety like Second Life.
There are also peer-to-peer types like Croquet (a free software platform and a network operating system for developing and delivering deeply collaborative multi-user online applications. Croquet was specifically designed to enable the creation and low-cost deployment of large scale metaverses.)

- Paraverses are something like a mash-up of virtual worlds combined with the physical world. An example of this is virtual surgery where doctors can experiment, practice and learn complex surgical procedures and sort of operate in a virtual environment that is projected onto the real environment, what the actual patient looks like.

- Machinima (an artificial word, composed of "machine", "cinema" and "animation") …refers to movies or television programs  that are actually made entirely inside a virtual world. No casts, no crew, you create the characters and the environment entirely within the virtual space and make a movie of it.

- There are megatrends like social networking which has grown tremendously over the last few years. Increased bandwidth and user generated content is incredibly important. High-definition television is another important trend: users are getting increasingly accustomed to very high-quality imagery.

Another megatrend is this notion of the virtual economy that can exist in the virtual world and be connected to the real economies around the world. (In Second Life you can build and sell things and convert your ‘Linden dollars’ into real dollars.)

- It is now socially acceptable to be part of virtual worlds. Different countries around the world have embraced this new technologies in different ways. However, not just technological changes, but the social and cultural changes will really be the foundation for the growth and development for the 3d internet.

- Raytracing will be an essential technology in the move to the 3d internet. Users however will not be satisfied with just good looking imagery; they want it to behave in a very natural and realistic fashion.

- Human-computer interfaces are needed who will let us be an active and integral part of the 3d environment – the user must be really engaged in the 3d experience. For example the Novint Falcon (Forced feedback device) and the 3d mouse by 3Dconnexion.

- We need to develop open environments, that are going to let us having these virtual worlds where we can move freely amongst them and we need to deliver much more rich content, and finally we need to created a trusted environment that is safe and secure.

ExitReality allows one to surf any Website in 3D

The software Exit Reality creates a 3D version of every standard website. What is ExitReality? ExitReality is a new technology that allows the threedimensional portrayal ...